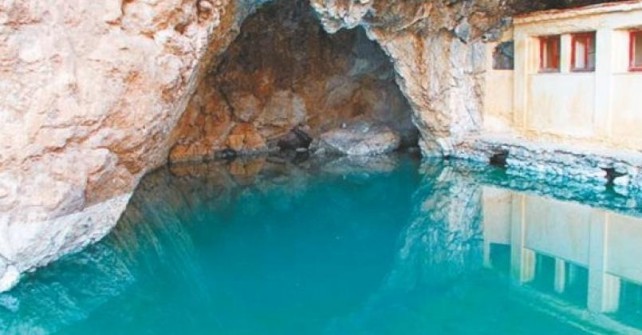 The Thermal Baths (or Springs) of Kaiafas is a spa in the municipality of Zacharo in southwestern Greece. It is located 42 km (27 miles) southeast of Katakolon and 20 km (12 miles) south of Olympia.

The Thermal Baths of Kaiafas is a geological formation that consists of a spring where warm water comes from deep inside the Earth’s crust and flows up to the surface. The spring is located inside a naturally formed cave in the foot of the Lapitha Mountain. The water of the spring contains an important concentration of sulfur compounds and is also rich in minerals. It has therapeutic properties and there is a spa facility exactly outside of the cave’s mouth.

The name of Kaiafas is said to derive from the homonymous priest of Judea who convicted Jesus Christ. As he was sailing to Rome, his ship encountered a storm and ran aground. The priest went to wash in a hot water spring, however, the curse he carried for his role in Christ`s suffering made the waters stink from the odor of his soul.

The region of Kaiafa is a unique ecosystem including the spas, the lake, the historic mountain of Lapitha and 4 km of golden sandy beach. Visitors can admire the natural beauty of the area and escape in the endless blue of the unique Kaiafa Lake with the therapeutic curative springs. The eastern shore of the lake is formed by the cliffs of mount Lapitha which rise vertically over the lake waters. The cliffs have got two caves known since antiquity as the caves of Anigrides Nymphs and Geranio Andro; this is the spot where the springs emerge from the mountain. The water is considered miraculous as it helps cure several conditions. The spring of Geranio is situated nearby. The waters of this spring are potable and not used baths; they are especially helpful for those suffering from kidney and liver disorders. The Anigrides nymphs’ springs are near the hydrotherapy centre. According to mythology, the Anigrides Nymphs used to live here. Moreover, here is where centaur Chiron cleansed his wounds from Hercules’s poisoned arrows. According to legend, the area of Zacharo was the Olympian god`s resort. The hot waters of the baths gush from the Anigrides cave and form a big lake in front of it.